State Bank of India (SBI) has reviewed the requirement of maintaining Monthly Average Balance (MAB) and the charges for non-maintenance of MAB. In this context SBI would like to state that financial inclusion including JAN DHAN Accounts have never been subject to any charges. In respect of the rest, it has now been decided to exempt the pensioners, beneficiaries of social benefits from the Government and accounts of Minors. Therefore, this is in addition to the already exempted categories under PMJDY accounts and Basic Savings Bank Deposits Accounts (BSBD).

The Bank has also decided to treat the metro and urban centres in the same category and the requirement of MAB in metro centres stands reduced to Rs.3000/- . For non-maintenance of MAB, the charges have also been revised downward ranging from 20% to 50% across all population groups and categories. The charges at semi-urban and rural centres range from Rs.20/- to Rs 40/- and at urban and metro centres from Rs 30/- to Rs 50/-. The revised MAB requirement and charges will become applicable from the month of October 2017. 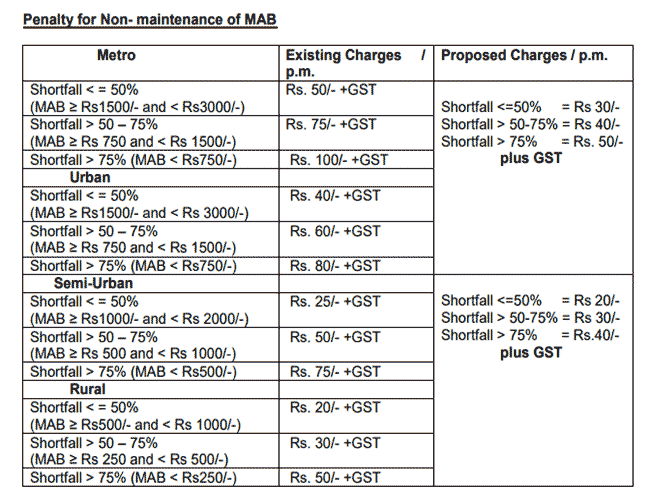