NFIR has insisted that PLB for 2016-17 to be granted before Dussera and it should not be less than 78 days of wages. In fact, the Railway Ministry should consider motivating the staff by granting more number of days wages than previous year at this juncture

Sub: Productivity Linked Bonus for the financial year 2016-17 to be paid in the current year 2017-reg.

Kind attention of Railway Board is invited to the discussions held on 4th August, 2017 in the Chamber of Additional Member (Staff), wherein the Federation has explained the need to accord approval for payment if Productivity Linked Bonus equivalent to not less than 78 days wages as was done in the previous years. 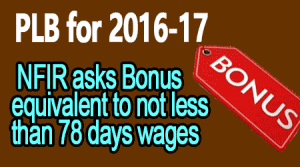 NFIR again places the facts as below for immediate action for sanction:-

NFIR, therefore, requests the Railway Board to kindly take action for sanctioning the P.L. Bonus equivalent to not less than 78 days wages. It is also requested that payment may be arranged before commencement of Dussehra Pooja Holidays.

Federation may be kept apprised of the action taken in the matter.