One of the conditions stipulated for grant of Bunching increment is that the difference between the lower and higher pay should be atleast 3%.

It could be seen that at many levels of the Pay Matrix, the difference between one cell and another is less than 3% of the Basic Pay of the amount in the lower cell. However, the said lesser amount is still treated as one increment. In the circumstance to deny the government servant the Bunching increment on the ground that the difference is less than 3% is not reasonable. The said condition required to be removed. Given here under is the illustration which explains the issue. 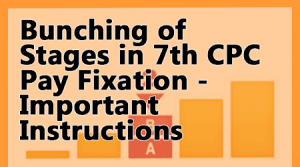 It is requested that to remove the anomaly, the MTS officials who are drawing Rs.7660/- in the pre-revised scale may also be made eligible to get additional increment.