Promotion Pay Fixation Calculator with results of 2 Option and DNI

7th Pay Commission has recommended 2 dates for granting of Annual Increment as requested by the Federations. The central Government also accepted this recommendation and issued order for granting of Annual Increment on 1st January and 1st July. Subsequent to the implementation of this order it was thought that Fixation of Pay for Promotion under the Provision of FR 22(1)a(1) may not be required. 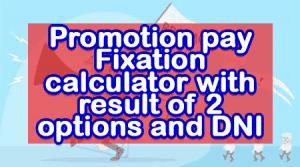 But fixing the Pay for Promotion on date of Promotion as illustrated in the CCS (RP) Rules 2016 is not beneficial for some cases. Because

So the Government Servants sought the choice of option to Fix their Pay on Promotion on either Date of Promotion or date of Next Increment which is allowed in Sixth CPC under the provision of FR 22(1)a(1). So that they can avoid changing of Increment date and six months delay in granting of Annual Increment. Many Departments were seeking clarification for providing option under the Provision of FR 22(1)a(1) and DoPT has issued order for continuance of the Provision of Exercising Option under FR 22(1)a(1).

The Promotion pay Fixation calculator developed taking all above facts into the account.

Another opportunity to Government employees to exercise/re-exercise option for pay fixation as allowed under O.M. dated 28.11.2019 within three months from the date of issue of this Office Memorandum

CGHS beneficiaries getting medicines for Chronic diseases shall be permitted to purchase medicines based on the prescription held (prescribed by CGHS Medical Officers/CGHS Specialists /other Govt. Specialists/ Specialist of empanelled hospital) till 31st July, 2021