New Delhi, Jun 29 (PTI) Recommendations of the 7th Pay Commission got the Cabinet nod today, which will benefit over one crore government employees and pensioners.

The decision to this effect was taken in a meeting which was chaired by Prime Minister Narendra Modi, sources said.

The government in January had set up a high-powered panel under the Cabinet Secretary to process the recommendations of the 7th Pay Commission that will have a bearing on remuneration of nearly 50 lakh central government employees and 58 lakh pensioners. 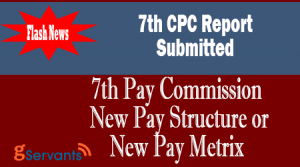 The Commission had recommended a 23.55 per cent overall hike in salaries, allowances and pension involving an additional burden of Rs 1.02 lakh crore, or nearly 0.7 per cent of GDP.

While the Budget for 2016-17 did not provide an explicit provision for implementation of the 7th Pay Commission, the government had said the once-in-a-decade pay hike for government employees has been built in as interim allocation for different ministries.