The need for fixing the minimum wages at Rs 26,000/- and modifying the multiplying factor was explained in detail with full justification. The leaders drew the attention of Shri Chaturvedi to Page No 63 of 7th CPC which is as follows:

It is clear from above that the pay rise is only 14.3% in 7th CPC, which is causing lot of resentment and unrest among 34 lakh Central Govt Employees belonging to Railways, Defence, Postal etc., Mr R.K. Chaturvedi assured to explain the views expressed by NJCA leaders to the Cabinet Secretary and stated that within 10-15 days a meeting between NJCA, Empowered Committee and the Implementation Cell will be held for further discussions.

The NJCA leaders made it ample clear that in the event of No Negotiated Settlement all the central government employees will be compelled to serve Strike Notice on 11th March 2016 and proceed on strike from 6.00AM on 11th April 2016.

As already decided by NJCA all the Central Govt Employees must prepare themselves for Indefinite Strike from 11th April 2016.

READ ALSO : Meeting with Empowered Committee will be held within 15 Days : NJCA 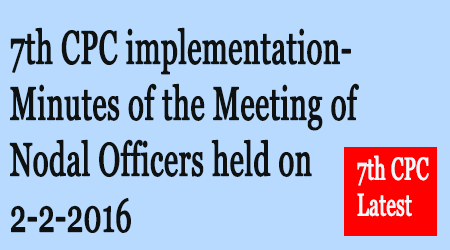