7th Pay commission in its report stated at page 79 entitled Entry Pay, that,” Although the rationalization has been done with utmost care to ensure minimum bunching at most levels, however if situation does  arise whenever more than two stages are bunched together, one additional increment equal to 3 percent may be given for every two stages bunched, and pay fixed in the subsequent cell in the pay matrix.  [ See :Pay fixation for upgraded Scales and bunching benefits in 7th CPC ]

Because the corresponding Level for Grade Pay Rs.10000 is Level 14.

But in the 7th CPC Report, Level 15 is mentioned instead of Level 14, hope it might be a typographical error. Readers are requested to Read it as Level 14 against Level 15 mentioned in the above illustration . see the image below…] 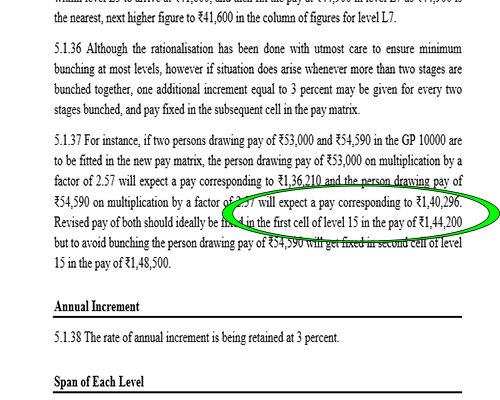 Lets now be clear about the above example..

The Person who has earned one increment more than his junior,  will get fixed one cell forward if they both happened to be fixed in the first cell of the particular Level

1.Where does the situation especially arise …?

These situations will arise in the cases of ..

a) Wherever Upgradation of Grades are recommended, there the Pay fixations for some persons in the Lower grade, irrespective of number of increments earned, as shown above, the Pay will have to be fixed at the first cell of Particular Upgraded Level.

b) When the pay arrived by using uniform multiplication factor 2.57 is lesser than the minimum pay corresponding to the level prescribed for that Grade, where some cases, irrespective number of increments earned, has to be fixed at the first cell of that Particular Level.

ALSO READ : Pay fixation for the Post where its Grade Pay Upgraded by Seventh CPC