NPS has been implemented for all Government Employees (except armed forces) joining Central Govt. on or after 01 January 2004. Most of the State/UT Governments have also notified the National Pension System (NPS) for their new employees. NPS has been made available to every Indian Citizen from 01st May 2009 on a voluntary basis.
Further, from 1st June 2015, the Atal Pension Yojana, has been launched which has given the much required impetus to the social security schemes Currently, NPS and APY together have more than One Crore subscribers with total Asset Under Management (AUM) of Rs.1,00,275 crores. The segment wise status of the NPS and APY as on
03.10.2015 is as under: 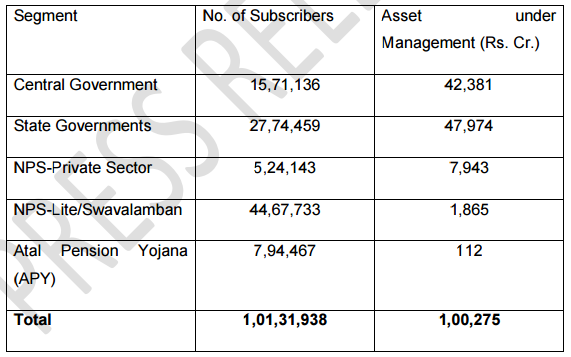 PFRDA has taken various steps at the policy as well as operational level to make NPS more subscriber friendly. In addition to this additional tax benefits made available exclusively to NPS has given a fillip to the scheme. This is further expected to result into a substantial increase in the subscriber base by end March 2016.

The following steps have been taken in the recent past for the convenience of the subscriber:

APY scheme provides minimum Govt guaranteed monthly pension to subscribers ranging from Rs 1000 to Rs 5000. Further, Govt. of India also co-contributes 50% of the total contribution made by a subscriber during a financial year subject to maximum of Rs 1,000/- per annum for a period of five years, if eligible subscribers open the account by 31st December 2015. All Indian Citizens, in the age group of 18-40 years are eligible to join the scheme through any bank branch. About 8 lakh subscribers have joined APY till date.