You are here: Home / DEARNESS ALLOWANCE / Latest position on Dearness Allowance from January 2015

Living at the cost of their life is ‘life style’ of working class. Since they couldn’t change their routines, their income will not be changed. It remains stationary until the rate of DA brings some upward movement in every six months. It’s quite a little amount of increase for the government employees coming under PB-I and PB-II bracket comparing to the Government officials in executive class that is PB-III and PB-IV. Any way whatever the amount of increase, it matters for one who gets some relief out of it. 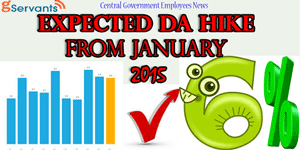 The expectation for rate of DA from January 2015 is almost reached its end. As 10 Months AICPIN for Industrial Workers are released, the rate of DA can be arrived approximately. Since the AICPIN point remains stationary for the past 3 months, the remaining two months AICPIN points will not influence much in the calculation of rate of DA. The price Index fluctuation between -2 to +5 to this Month’s AICPIN for remaining two months will not change the expected DA rate arrived out of these 10 Month’s AICPIN Points. In other words, Considering that the remaining two month’s AICPIN remain stationary, the 12 months total of AICPIN will be 2963. The movement between -4 to +10 to this total will not change the amount of DA to be increased from January 2015. Fluctuation beyond these points is not possible in this current trend.To this extant, now the expected DA from January 2015 can be arrived exactly. See the DA calculation table below..