You are here: Home / DOP&T ORDERS / Consolidated Instructions on Forwarding of Applications of Government Servants for outside employment 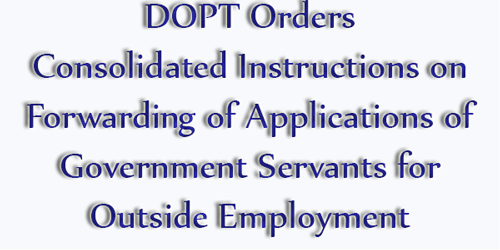 Subject: Consolidated Instructions on Forwarding of Applications of Government Servants for Outside Employment-regarding.

The undersigned is directed to refer to the subject mentioned above and to say that various instructions/guidelines have been issued by the Government from time to time regarding forwarding of applications of Government Servants for posts outside their own Cadre. All such instructions issued till date have been consolidated under easily comprehensible headings for the facility of reference and placed as Annexure to this O.M. All Ministries/ Departments are requested to bring the above guidelines to the notice of all concerned.

These guidelines relate to forwarding of applications of Government servants as direct recruit for posts within the Central Government, State Governments, Autonomous/ Statutory Bodies, CPSEs etc. It may be noted that in a case in which a particular employee cannot be spared without serious detriment to important work in hand, public interest would justify withholding of his application even if otherwise the application would have been forwarded. It may be added for information that where for good and sufficient reasons an application is withheld no infringement of any Constitutional rigit is involved.

a. The Heads of Departments should interpret the term ‘public interest’ strictly and subject to that consideration, the forwarding of applications should be the rule rather than an exception. Ordinarily, every employee (whether scientific and technical or non-scientific and non-technical personnel) should be permitted to apply for an outside post even though he may be holding a permanent post.

b. No distinction need be made between applications made for posts in a Department under the Central government. Autonomous Bodies or sub-ordinate offices, posts under the State Governments, posts in Public Sector Undertakings owned wholly or partly by the Central Government or a State Government and posts in quasi-Government organizations. They should all be treated alike so far as the forwarding of applications is concerned. If, however, a Government servant desires to apply for a post in a private concern, he should submit his resignation or notice of retirement, as the ease may be, before applying for private employment.

3. GENERAL PRINCIPLES FOR DEALING WITH SUCH APPLICATIONS

The general principles to be observed in dealing with such applications are as under:

Download The Instructions : Consolidated Instructions on Forwarding of Applications of Government Servants for outside employment

All Pension Disbursing Banks will issue pension slip to pensioners after credit of pension on their registered mobile numbers through SMS, email or whatsapp etc to provide complete details of monthly pension paid along with break-up of the amount credited and tax deductions if any.

Under the provisions contained in Lokpal and Lokayuktas Act, 2013, Lokpal of India has the mandate to inquire into allegations of corruption against certain public functionaries and for matters connected with them

DoPT has sent the Final Agenda Notes to Staff Side, National Council JCM for discussion during the meeting to be held on 26.6.2021. 29 Points Agenda Notes including withdrawal of DA/DR Freeze, MACP issues, COVID related demands and various other issues will be discussed in the meeting.

These regulations may be called the Pension Fund Regulatory and Development Authority (Exits and Withdrawals under the National Pension System) (Amendment) Regulations, 2021. These shall come into force on the date of their publication in the official gazette

Pension paying branches of Banks are directed to obtain only the minimum essential details/documents from the claimants of family pension, and to ensure that they are not subjected to any harassment by seeking unnecessary details and documents.

After much persuasion from Staff Side NCJCM, Finally Central Government is prepared to hold the 48th Meeting of the National Council (JCM) on 26.06.2021 under the Chairmanship of Cabinet Secretary to discuss various service matters of Govt Servants