You are here: Home / DEARNESS ALLOWANCE / The Dearness Allowance from July 2014 will be 107% 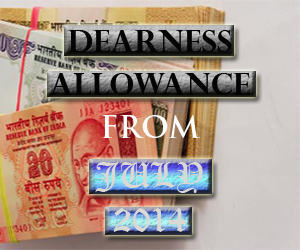 All are expecting the June Month’s AICPIN to know the exact rate of dearness Allowance to be paid from July 2014. The expected Dearness Allowance  has been finalized by the AICPIN released by Labour Bureau today.

According to the release of Labour Bureau, the Consumer Price Index for Industrial workers for the month of June 2014 increased by 2 points and pegged at 246.

The Dearness Allowance payable to Central Government employees shall be enhanced from the existing rate of 100 % to 107 % with effect from 1st July, 2014. Necessary order will be issued by Finance Ministry after the Cabinet approval. The approval of the cabinet may be expected by the first week of September in its Meeting.