You are here: Home / Pay fixation for upgraded Scales and bunching benefits in 7th CPC

5.1.31 The Commission has received numerous representations on the issue of fixation of entry pay for direct recruits at a level higher than those promoted into the same level from below. In the existing system, the entry pay for new or direct recruits takes into consideration the weightage given to qualifying service prescribed by DoPT, whereas for those reaching the grade through promotion from lower grade, the entry pay is fixed at the minimum of the pay band plus grade pay corresponding to the new grade. The entry pay therefore varies, and is different for those entering a level directly and those getting promoted into it. There have been demands for a uniform entry pay for all.

5.1.32 In the new pay matrix, it is proposed that direct recruits start at the minimum pay corresponding to the level to which recruitment is made, which will be the first cell of each level. For example a person entering service as a direct recruit at level 3 will get a pay of ₹21,700, at level 8 of ₹47,600, at level 10 of ₹56,100 and so on.

5.1.33 For those who have been promoted from the previous level, the fixation of pay in the new level will depend on the pay they were already drawing in the previous level. For instance, if a person who was drawing ₹26,000 in level 3 gets a promotion to level 4, his pay fixation will be as shown in Table 7: 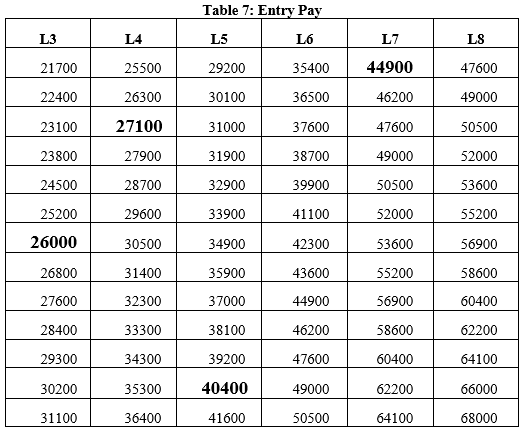 Step 1: After grant of one increment in level 3 the pay increases to ₹26,800 in level 3 itself.
Report of the Seventh CPC

5.1.36 Although the rationalisation has been done with utmost care to ensure minimum bunching at most levels, however if situation does arise whenever more than two stages are bunched together, one additional increment equal to 3 percent may be given for every two stages bunched, and pay fixed in the subsequent cell in the pay matrix.

READ : Pay fixation for the Post where its Grade Pay Upgraded by Seventh CPC