You are here: Home / NPS Withdrawal Types and Benefits

What types of Withdrawals are allowed under the National Pension System?

In case the total corpus in the account is less than Rs. 2 Lakhs as on the Date of Retirement (Government sector)/attaining the age of 60 (Non-Government sector), the subscriber (other than Swavalamban subscribers) can avail the option of complete Withdrawal.

b) Upon Death – The entire accumulated pension wealth (100%) would be paid to the nominee/legal heir of the subscriber and there would not be any purchase of annuity/monthly pension.

c) Exit from NPS Before the age of Normal Superannuation – At least 80% of the accumulated pension wealth of the subscriber should be utilized for purchase of an annuity providing the monthly pension of the subscriber and the balance is paid as a lump sum to the subscriber. 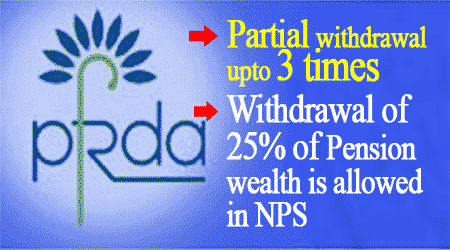