You are here: Home / How 23.55% of hike in Pay and Allowances arrived from 7th Pay Commission recommendation

23.55% of hike in Pay and Allowances arrived from 7th Pay Commission recommendation

The financial impact of the recommendations of this Commission will be reflected through increases in expenditure on Pay, Allowances and on Pension. The likely quantum of increase on account of each of these is summarised below: 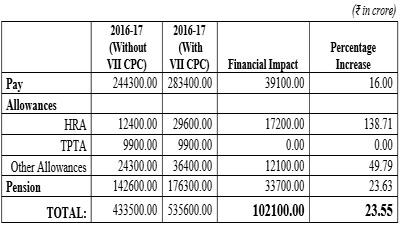 Based on the current trend, the total expenditure on Pay (including DA, but excluding other allowances), during the year 2016-17, without factoring in the recommendations being made by this Commission, is expected to be ₹2,44,300 crore. After implementation of the recommendations of the VII CPC, this is likely to rise to ₹2,83,400 crore, reflecting an increase of ₹39,100 crore (16.00%).

The increases in allowances relate to the following:
a) House Rent Allowance (HRA): This accounts for the principal increase in the expenditure on allowances since it is calculated as a percentage of the basic pay and the rise in basic pay based on recommendations of the Commission would be reflected as increased HRA. The expenditure on account of HRA is likely to go up from ₹12,400 crore to ₹29,600 crore, an increase of ₹17,200 (138.71%). This figure also includes an expenditure of ₹3,700 crore that is likely to occur on account of the expansion in coverage of HRA benefiting personnel serving in the CAPFs.

b) Transport Allowance (TPTA): Since TPTA is already fully indexed to DA, there will be no financial impact of the Commission’s recommendation regarding this allowance.

In all, the increase in expenditure on allowances is expected to by about ₹29,300 crore. As pointed out in Chapter 3, allowances are currently not being separately budgeted or accounted for in the books of the Central government. Hence the Commission has used approximations to arrive at the percentage increase in allowances.

In the case of certain components of retirement benefits constituting expenditure on pension, the recommendations of the Commission will lead to ad valorem increases. In the case of gratuities, where enhancement of ceiling has been recommended after a gap of ten years, the raising of the ceiling will also contribute to the increased outgo.
16.6 Based on the current trend, the total expenditure on Pension during the year 2016-17, without factoring in the recommendations being made by this Commission, is expected to be ₹1,42,600 crore. After implementation of the recommendations of the VII CPC, this is likely to rise to ₹1,76,300 crore, reflecting an increase of about ₹33,700 crore (23.63%).
16.7 In arriving at the above it has been borne in mind that the year on year increase, in both Pay and in Pensions, has averaged about 11 percent. This takes into account the annual increments, the increase on account of dearness allowances, as well as pay-outs that are indexed to the rate of DA. The increases reflected above are those which would be beyond the normal increase, and solely on account of the implementations of the Seventh CPC.
16.8 These figures include the increases on account of all segments of Government employees, viz., Civil (including Posts and Railways) as well as Defence personnel. The estimate related to pension is based on the new formulation being recommended by the Commission, which is more equitable than the existing formulation. The calculation is not based on the ‘One Rank One Pension’ announcement of the Government, the modalities of which are being worked out.

Of the total increase estimate, the break-up of the increase to be borne on the General Budget and that on the Railway budget is given below: 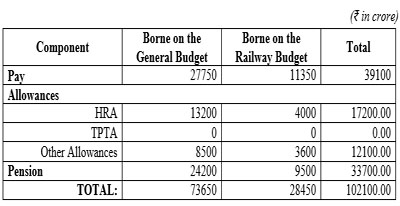 As mentioned earlier, this represents an overall increase of 23.55 percent over the Business As Usual scenario. Of this, 23.94 percent increase will be in the General Budget, while 22.62 percent will be the increase in the Railway Budget