You are here: Home / Bank DA Calculation and Formula

DA is revised for bankers for every quarter as mentioned below

Based on All India Consumer Price Index Numbers for Industrial Workers, the DA for Bank Employees calculated for each quarter.

Three months AICPIN previous to one month from the starting Month of the Quarter for revising DA are considered for calculating Bank DA. 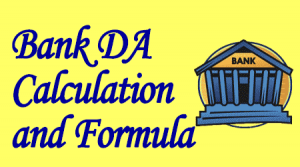 DA for the Quarter starts from February to April is calculated from AICPIN for Industrial Workers for the Months of October, November and December.

Because the AICPIN for this month will be released by the Labour Bureau on the last day of next month. So, the Average of consecutive three months Slabs, prior to one month to the quarter for DA will be counted for revising DA.
Calculation

Here is how the DA is calculated for bank employees:

Collect the month wise CPI data from April, May and June for the Quarter of Revising DA from August to October
The CPI is converted using conversion factor 4.63 and 4.93 to link the same to base year 1960.

According to this calculation, the DA slab for next quarter will be 455 on which 0.10% is payable as DA.

By deducting the same from previous quarter DA, increase in DA can be calculated.