The Commission has estimated the minimum pay (the calculations for which have been tabulated in the Annexure) through the following steps:

Step 2: The quantities have been multiplied by their respective product prices to arrive at product wise cost. The price adopted for each product is the average of prices of various items that are included in the product. The price of an item is the average of its prices prevailing in each month from July, 2014-June, 2015. [At monthly family consumption of 7.2 kg the Commission has estimated the monthly expenditure on Dal at ₹704.44 after calculating the price of Dal at ₹97.84 per kg. The price of Dal has been calculated as the average of prices of Toor, Urad and Moong Dal items specified under the product Dal and whose prices have been determined at ₹87.86, ₹109.66 and ₹96.00 respectively. The prices of these three Dal items are the twelve monthly average prices for the period July, 2014–June, 2015.] The prices of all items have been sourced from Labor Bureau, Shimla. These prices are used in the calculation of the CPI (IW) and subsequently the calculation of Dearness Allowance. In the current exercise the prices of all items are for the period July 2014-June 2015 and have been used in the calculation of DA at 119 percent operative from 01.07.2015.

Step 3: The cost of food, clothing and detergent products obtained from Step 2 has been divided by 0.8 to arrive at a total, of which 20 percent provides for fuel and lighting expenses. This addresses the fifth component under para 4.2.3. The fourth component on housing under para 4.2.3 has not been addressed at this stage as its quantification at the final stage of pay estimation is considered more appropriate by the Commission.

Step 4: The cost estimated from Step 3 is divided by 0.85 to arrive at a total, of which 15 percent is towards recreation, ceremonies and festivities. The prescribed provision of 25 percent to cover education, recreation, ceremonies, festivals and medical expenses has been moderated to 15 percent because expenses on educational and medical necessities are being separately provided for through relevant allowances and facilities and thus need not be provided here. This partially addresses the first of the two components outside the 15th ILC norms.

Step 5: The cost estimated from Step 4 is increased by 25 percent to account for the skill factor, following the reasoning that there is no unskilled staff in the government after the merger of Group D staff in Group `C’. This addresses the second of the two components outside the 15th ILC norms.

Step 6: The cost estimated from Step 5 is divided by 0.97 to arrive at a total, of which 3 percent provides for housing expenses. This is done in view of the observation that license fees for government accommodation is about 3 percent of the total pay. This addresses the fourth component stated under para 3 but partially so, as the 15th ILC norms had fixed the housing provision at 7.5 percent. 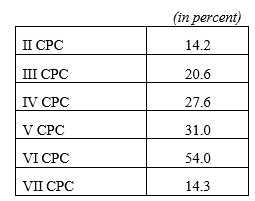 VII CPC 14.3 4.2.10 The real pay in government is protected by providing Dearness Allowance (DA), which is that percentage of pay by which the CPI (IW)16 increases over a fixed base value. 16 CPI (IW) is Consumer Price Index for Industrial Workers maintained by Labour Bureau, Shimla.

Consequently the absolute amount of DA keeps on growing with every point increase in CPI (IW). On the other hand the real value of the industrial minimum wage is protected by providing Variable Dearness Allowance (VDA), which is a fixed amount of money given per point increase in CPI (IW) as notified by the Chief Labour Commissioner (central sphere) from time to time. Consequently, over a period of time, the minimum pay + DA in government becomes larger than the minimum wage + VDA in the private sector even though the basic minimum wage in both the sectors is calculated on the basis of the 15th ILC norms. As on 01.01.2015 the minimum pay in government was ₹14,910 whereas minimum wage for a skilled worker was in the range of ₹9,000–₹11,000 per month.
4.2.11 Besides DA, government provides house rent, transport, location and function specific allowances besides Leave Travel Allowance (LTA) which, along with the basic pay, constitute the gross pay of a government employee. If one were to only take HRA at 30 percent of the basic pay and transport allowance at ₹400+DA, as are admissible in A1/A class cities, together with educational allowances for two children at the rate of ₹1,500 per month, the gross pay further increases to ₹20,870 (20870 = 14910 +2100+860+3000) as on 01.01.2015. In addition government gives a host of other benefits that can be measured under the CTG (Cost to Government of an employee) concept. From these numbers it is clear that benefits given to the lowest ranked government employees, whether monetized or not, are significantly higher than the minimum basic pay and also much higher than the emoluments of skilled industrial workers.
4.2.12 To obtain a comparative picture of the salaries paid in the government with that in the private sector enterprises the Commission engaged the Indian Institute of Management, Ahmedabad to conduct a study. According to the study the total emoluments of a General Helper, who is the lowest ranked employee in the government is ₹22,579, more than two times the emoluments of a General Helper in the private sector organizations surveyed at ₹8,000₹9,500.
4.2.13 After considering all relevant factors the Commission is of the view that the minimum pay in government recommended at ₹18,000 per month, w.e.f. 01.01.2016, is fair and reasonable and one which, along with other allowances and facilities, would ensure a decent standard of living for the lowest ranked employee in the Central Government. 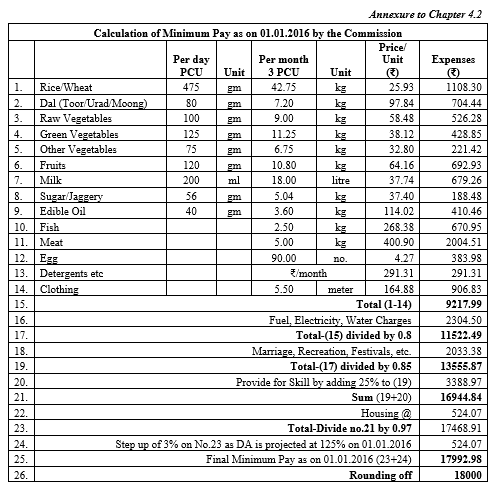