Fixation of Basic pension as per 7th CPC Pension formulation

The Commission recommends the following pension formulation for civil employees including CAPF personnel, who have retired before 01.01.2016:

i) All the civilian personnel including CAPF who retired prior to 01.01.2016 (expected date of implementation of the Seventh CPC recommendations) shall first be fixed in the Pay Matrix being recommended by this Commission, on the basis of the Pay Band and Grade Pay at which they retired, at the minimum of the corresponding level in the matrix. This amount shall be raised, to arrive at the notional pay of the retiree, by adding the number of increments he/she had earned in that level while in service, at the rate of three percent. Fifty percent of the total amount so arrived at shall be the revised pension.

ii) The second calculation to be carried out is as follows. The pension, as had been fixed at the time of implementation of the VI CPC recommendations, shall be multiplied by 2.57 to arrive at an alternate value for the revised pension.

iii) Pensioners may be given the option of choosing whichever formulation is beneficial to them.

(i) above may take a little time since the records of each pensioner will have to be checked to ascertain the number of increments earned in the retiring level. It is therefore recommended that in the first instance the revised pension may be calculated as at

(ii) above and the same may be paid as an interim measure. In the event calculation as per (i) above yields a higher amount the difference may be paid subsequently.

Illustration on fixation of pension based on recommendations of the Seventh CPC. 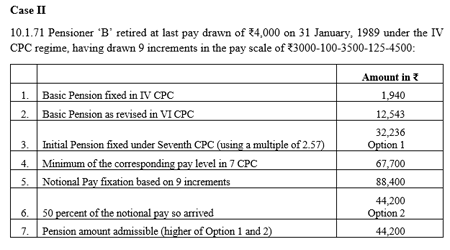