You are here: Home / Pension News / Release of Grant in Aid to Pensioners Associations

Release of Grant in Aid to Pensioners Associations

Subject: Web-based ‘Pensioners’ Portal’ Project – Release of Grant-in-Aid to Pensioners’ Associations for implementation of the objectives of the Portal.

Sir,
I am directed to convey the sanction of the President of India to the release of a sum of Rs.284969/- (Rupees Two Lakhs Eighty Four Thousand Nine Hundred and Sixty-Nine only) towards Grant-in-Aid in favour of the following 4 Pensioners Associations on their having been registered under NITI Aayog DARPAN and having been linked with PA&O under PFMS for meeting expenditure in connection with the implementation of objectives of ‘Pensioners’ Portal’, as per the details given below: 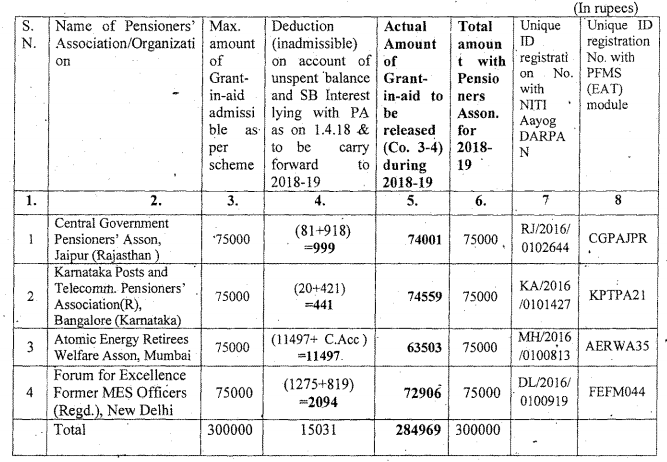 2. Utilisation Certificate in respect of earlier grant sanctioned to above Pensioner Association are enclosed.

4. Any other expenditure by the Pensioners’ Association on any activity/component other than those mentioned above will not be admissible from the Grant-in-Aid and will be treated as an unspent amount, to be recoverable or adjusted from the future grant as the case may. In case the actual expenditure during the year on individual. component is less than the permissible amount on individual components, the difference of Grant-in-Aid and the actual expenditure will be treated as unspent and will be adjusted in the next year’s grant.

5. Further, the above Grant-in-Aid is subject to maintaining a separate Bank Account for the Grant-in-aid under Pensioners’ Portal. The Grantee shall also furnish a Utilization Certificate (in the prescribed proforma) for the grant received and utilized during the year 2018-19 within six months of the close of the financial year 2018-2019 i.e. upto 30th September, 2019. Failure to do so will make the Grantee Pensioner Association liable for refund of entire Grant-in-Aid amount along with the interest.

7. The grant is further subject to the terms and conditions as indicated in the Annexure.

8. The above Pensioners Associations is, therefore, advised to book the utilization of funds for approved components under the Scheme of GIA through EAT Module under PFMS. Any expenditure incurred otherwise than through EAT module will not qualify for adjustment against the Grant-in-aid being sanctioned and released and the Association will be liable to refund such amount to this Department:

In View of the above Pensioner Associations are advised to book the expenditure against grant-in-aid only through PFMS EAT Module for the prescribed components as mentioned in the Sanction letter.

11. The Drawing & Disbursing Officer of the Department of Pension & Pensioners’ Welfare is authorized to draw the amount as mentioned in Col 5 of Table given in para l above for disbursement to the Grantee Pensioners Association by way of transferring the amount to the Bank Accounts of respeetive Pensioners’ Associations.

13. The accounts of_ the above Pensioners Associations shall be Open to inspection by the sanctioning authority-and the audit, both by the Comptroller and Auditor -General of the India under the provision of CAG (DPC) Act, 1971 and internal audit by the Principal Accounts Officer of the Department of Pension & Pensioners’ Welfare, whenever the organization is called upon to do so.

14. This sanction issues under financial powers delegated to the Ministries/Departments of the Government of India with the concurrence of Integrated Finance Division vide Diary No. Dir (F/P)/E5250 dated 27.09.2018.

Yours faithfully,
sd/-
(Manoj Kumar)
Under Secretary to the Govt. of India