After the Implementation of 7th CPC recommendation the retirement benefits of Central Government Employees are updated . Gratuity ceiling increased to 20 Lakhs and other benefits like Pension, Commutation of Pension,  Encashment of EL, GPF Balance and CGEGIS Benefits are paid as per Revised Pay Rules. The details about the Retirement Benefits of  CG Staffs are given below

The minimum eligibility period for receipt of pension is 10 years. A Central Government servant retiring in accordance with the Pension Rules is entitled to receive pension on completion of at least 10 years of qualifying service.

Minimum pension presently is Rs. 9000 per month. Maximum limit on pension is 50% of the highest pay in the Government of India (presently Rs. 1,25,000) per month. Pension is payable up to and including the date of death.

A Central Government servant has an option to commute a portion of pension, not exceeding 40% of it, into a lump sum payment. No medical examination is required if the option is exercised within one year of retirement. If the option is exercised after expiry of one year, he/she will have to under-go medical examination by the specified competent authority.

Lump sum payable is calculated with reference to the Commutation Table. The monthly pension will stand reduced by the portion commuted and the commuted portion will be restored on the expiry of 15 years from the date of receipt of the commuted value of pension. Dearness Relief, however, will continue to be calculated on the basis of the original pension (i.e. without reduction of commuted portion).

The formula for arriving for commuted value of Pension (CVP) is

* The commutation factor will be with reference to age next birthday on the date on which commutation becomes absolute as per the New Table annexed to the CCS (Commutation of Pension) Rules, 1981.

This is payable to the retiring Government servant. A minimum of 5 years’ qualifying service and eligibility to receive service gratuity/pension is essential to get this one time lump sum benefit. Retirement gratuity is calculated @ 1/4th of a months Basic Pay plus Dearness Allowance drawn on the date of retirement for each completed six monthly period of qualifying service. There is no minimum limit for the amount of gratuity. The retirement gratuity payable for qualifying service of 33 years or more is 16 times the Basic Pay plus DA, subject to a maximum of Rs. 20 lakhs.

This is a one-time lump sum benefit payable to the nominee or family member of a Government servant dying in harness. There is no stipulation in regard to any minimum length of service rendered by the deceased employee. Entitlement of death gratuity is regulated as under: 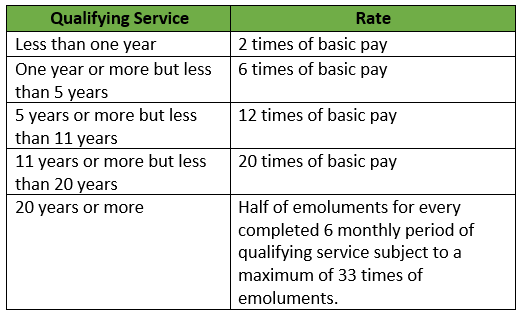 A retiring Government servant will be entitled to receive service gratuity (and not pension) if total qualifying service is less than 10 years. Admissible amount is half months basic pay last drawn plus DA for each completed 6 monthly period of qualifying service. This one time lump sum payment is distinct from retirement gratuity and is paid over and above the retirement gratuity.

Issue of No Demand Certificate

Dues owed by the retiring employees on account of Licence Fee for Government accommodation, advances, over payment of pay and allowances are required to be assessed by the Head of Office and intimated to the Accounts Officer two months in advance of the date of retirement so that these are recovered from retirement gratuity before payment. For this purpose the Licence Fee for those in occupation of Government accommodation is taken into account up to the end of the permissible period for which accommodation can be retained after retirement under the Rules on normal rent. The recovery of Licence Fee beyond that period is the responsibility of the Directorate of Estates. If, for any reason final dues cannot be assessed on time, then 10% of gratuity is withheld from gratuity on the basis of a commutation from the Directorate of Estates in this regard.

As per General Provident fund (Central Services) Rules, 1960 all temporary Government servants after a continuous service of one year, all re-employed pensioners (Other than those eligible for admission to the Contributory Provident Fund) and all permanent Government servants are eligible to subscribe to the Fund. However, these rules are not applicable to any of the Government Servants who join service on or after 1.1.2004. A subscriber, at the time of joining the fund is required to make a nomination, in the prescribed form, conferring on one or more persons the right to receive the amount that may stand to his credit in the fund in the event of his death, before that amount has become payable or having become payable has not been paid. A subscriber shall subscribe monthly to the Fund except during the period when he is under suspension. Subscriptions to the Provident Fund are stopped 3 months prior to the date of superannuation. Rates of subscription shall not be less than 6% of subscribers emoluments are not more than his emoluments. Rate of interest varies according to notifications of the Government issued from time to time. The rules provide for drawal advances/ withdrawals from the fund for specific purposes.
The conditions for withdrawal from the fund have been liberalized and now no documentary proof is required to be furnished by the subscriber for GPF withdrawal. On retirement of a subscriber, instructions have been issued for immediate payment of final balance on retirement. No application is required to be submitted by the subscriber for final payment from the fund. .

The Contributory Provident Fund Rules (India), ,1962 are applicable to every non-pensionable servant of the Government belonging to any of the services under the control of the President. A subscriber, at the time of joining the Fund is required to make a nomination in the prescribed Form conferring on one or more persons the right to receive the amount that may stand to his credit in the Fund in the event of his death, before that amount has become payable or having become payable has not been paid.

A subscriber shall subscribe monthly to the Fund when on duty or Foreign Service but not during the period of suspension. Rates of subscription shall not be less than 10% of the emoluments and not more than his emoluments. The employer’s contribution at that percentage prescribed by the Government will be credited to the subscriber’s account and this is 10%. The Rules provide for drawal of advances/ withdrawals from the CPF for specific purposes. As in GPF Rules, the CPF Rules also provide for Deposit Linked Insurance Scheme.

Encashment of leave is a benefit granted under the CCS (Leave) Rules and is not a pensionary benefit. Encashment of Earned Leave/Half Pay Leave standing at the credit of the retiring Government servant is admissible on the date of retirement subject to a maximum of 300 days.

A portion of monthly contributions paid while in service is credited in a Saving Fund, on which interest accrues. A Government servant while entering service has to apply in Form No. 4 of the above Scheme to the Head of Office, who shall issue a sanction for the payment of subscriber’s accumulation in the Savings Fund segment together with interest and arrange for its disbursement, soon after retirement. Payments under this Scheme are made in accordance with the Table of Benefit (as issued by Department of Expenditure) which takes in to account interest up to the date of cessation of service. Insurance cover benefit under this Scheme is available to the family in the event of death of the subscriber.