Even after March AICPIN remained stationary at 287 points, 10% DA from July 2018 is in the Cards.

Owing to the fact that there is a possibility to get 5 to 6 Points increase in remaining three month’s AICPIN, we believe most probably it will take the hike in DA to 3% in July 2018.

From the calculations shown below, it appears that 5 to 6 Points total increase in AICPIN in the Months of April to June 2018, will fetch 3% hike in Dearness Allowance. So this hike will enhance the rate of DA from existing 7% to 10% with effect  from 1st July 2018 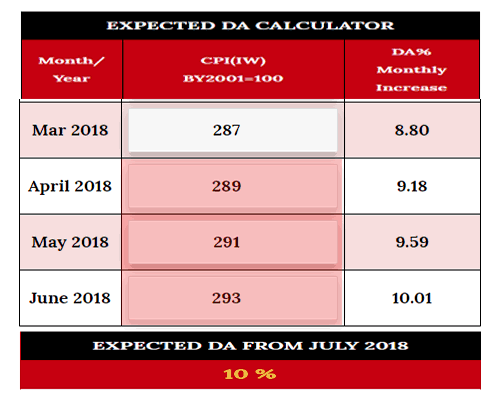 Calculate with your assumption