There are Four Increment dates are in TN 7th CPC Revised Pay Structure for granting  of Annual Increment. According to their Date of Appointment or Promotion they can select any one of these four dates as their date of next Increment

Date of next increment in the Revised Pay Structure

(1) There shall be four quarters for grant of increment namely, 1st January, 1st April, 1st July and 1st October of every year:

Provided that an employee shall be entitled to only one annual increment either on 1st January or 1st April or 1st July or 1st October depending on the date of his appointment and promotion. 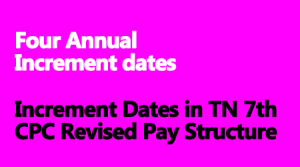 (i) The Government employees shall be permitted to draw their annual increment in the revised pay structure in four quarters admissible in the existing pay structure as the case may be viz. 1st January, 1st April, 1st July and 1st October.

(ii) The next increment of a Government employee in the revised pay structure shall be granted on the date he would have drawn increment had he continued in the existing pay structure on completion of the required qualifying service of one year.

(iii) lf a Government employee draws his next increment in the revised pay scale under sub-rule (ii) above and thereby becomes eligible for higher pay than his senior whose next increment falls due on a later date, then the pay of such senior shall be re-fixed equal to the pay of the junior from the date on which the junior becomes entitled to higher pay.