Sub :– Implementation of Government’s decision on the recommendations of the Seventh Central Pay Commission Revision of pension of pre-2016 retired medical officers. 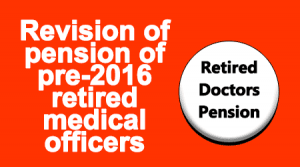 that the pension/family pension w.e.f. 01.01.2016 in respect of all Central civil pensioners/family pensioners, who retired/died prior to 01.01.2016, may be revised w.e.f. 01.01.2016 by notionally fixing their pay in the pay matrix recommended by the 7th CPC in the level corresponding to the pay in the pay scale/pay hand and grade pay at which they retired/died. This will be done by notional pay fixation under each intervening Pay Commission based on the Formula for revision of pay.

4. The revision of pension/family pension of retired medical officers in the above manner will be further subject to the condition that the notional pay as on 1.1.2016 plus NPA does not exceed the average of basic pay of the revised scale applicable to the Apex Level and the level of Cabinet Secretary.