You are here: Home / DOP&T ORDERS / Ministries to take necessary action for effective implementation of revision of pension of AIS Officers

No. 14021/4/2016-AIS-II
Government of India
Ministry of Personnel, Public Grievance and Pensions
Department of Personnel & Training

The undersigned is directed to refer to this Department’s letter of even number dated 19th May 2017 vide which the instructions dated 12th May 2017 [ See ] relating to revision of pension of pre-2016 pensioners issued by Department of Pension and Pensioner’s Welfare in the context of implementation of VII CPC recommendations, were extended to All India Service (AIS) Pensioners. The said letter dated 19th May 2017 was also sent to all Ministries / Departments of Government of India (copy enclosed).

2. Many retired AIS Officers who are drawing pension from the Central Government, have since voiced grievances at various levels, stating that pension revision in pursuance of the order dated 19th May 2017 has not taken place so far. 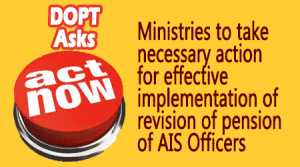 3. It is observed in this regard that CPAO, with the approval of the Controller General of Accounts, have issued instructions on 25 th May 2017 to Pr. Chief Controller of Accounts / Chief Controller of Accounts etc. about the modalities to be followed for expeditious implementation of the instructions dated 12th May 2017 of the D/o Pension & PW. Joint Secretary (Admn) / Admin in charge of Ministries / Departments have also been requested by CPAO to instruct their Head of Offices (HOOs) to start immediately sending the revised pension cases to the PAOs on the basis of records available with them and monitor the progress in this regard. Further follow up instructions have also been issued by CPAO on 7th July 2017. [ See ]

4. In view of the hardships being encountered by retired AIS Officers vis-a-vis revision of their pensions, all Ministries / Departments are requested to take necessary action for effective and expeditious implementation of the instructions dated 19th May 2017 pertaining to revision of pension of AIS Officers read with D/o Pension and PW instructions dated 12th May 2017.

(Rajesh Kumar Yadav)
Under Secretary to the Govt. of India

Finance Ministry Issued order for enhancing DA from 1st July 2021 and as a result of that all central government employees will get three months arrears of increased rate of Dearness Allowance from July 2021.

Cabinet approves release of an additional instalment of Dearness Allowance to Central Government employees and Dearness Relief to Pensions, due from 01.07.2021

The Dearness Allowance for central government Employees to be paid with effect from 1st July 2021 is not yet approved by Union cabinet. It is expected that the Union cabinet will approve this DA hike proposal in its meeting to be held in this week.

Notwithstanding anything contained in sub-rules (1), (2) and (3), a member of the Service, being a member of the Indian delegation or otherwise, may receive and retain gifts from foreign dignitaries in accordance with the provisions of the Foreign Contribution (Acceptance or Retention of Gifts or Presentations) Rules, 2012, as amended from time to time”.

It has been decided that, on death of a Government servant in the performance of bonafide duty also, payment of ex-gratia lump sum compensation may be made to a member or members of the family in whose favour a nomination is made by the Government servant during service