You are here: Home / 7TH PAY COMMISSION / 7th CPC Revised Pension / Revision of Pension, Gratuity, Commutation of Pension, Family Pension to Armed Forces on or after 1.1.2016

No. 17(02)/2016-D(Pen/Pol)
Government of India
Ministry of Defence
Department of Ex-Servicemen Welfare

The undersigned is directed to refer to the Government’s decisions on the recommendations of the Seventh Central Pay Commission notified vide Government of India, Ministry of Defence, Department of Ex-Servicemen Welfare Resolution bearing No 17(l)/2014/D(Pension/Policy) dated 30.9.2016, recommendations of National Anomaly Committee on methodology for calculation of disability element for Defence Forces and Ministry of Personnel, Public Grievances and Pension, Department of Pension” and Pensioners’ Welfare Office Memorandum No. 38/37/2016 – P&PW(A) (i) dated 4.8.2016 as modified vide OM F No 42/14/2016-P&PW(G) dated 24.10.2016. Sanction of the President is hereby accorded for modification in the rules regulating Pension, Family pension, Retirement/ Death/Service Gratuity, Commutation of pension, pensionary awards under casualty pensionary awards including Ex-gratia lump sum compensation in cases of invalidment etc., to the extent specified in this letter.

3.1 The revised provisions of this letter shall apply to the Commissioned Officers (including MNS and Territorial Army Officers), Junior Commissioned Officers and Other Ranks of the three Services, Non-Combatants (Enrolled) in the Air Force, Defence Security Corps and the Territorial Army (hereinafter collectively referred to as Armed Forces Personnel) who retired/discharged! released/invalided out or died in harness on or after 1.1..2016. Separate orders have already been issued in respect of Armed Forces Personnel who retired/died before 1.1.2016.

3.2 Where Pension! Family Pension/ Death Gratuity/ Retirement Gratuity/ Commuted Value of Pension or pensionary awards under casualty pensionary awards has already been sanctioned provisionally, or otherwise, in cases of retirement/death occurring on or after 1.1.2016, the same shall be revised in terms of these orders. In cases where pension has been finally sanctioned under the pre-revised orders and if it happens to be more beneficial than the pension becoming due under these orders, the pension already sanctioned shall not be revised to the disadvantage of pensioner.

4.1 The term ‘ Reckonable Emoluments’ for the purpose of calculating various-pensionary benefits other than various kinds of Gratuities, shall consist the following- 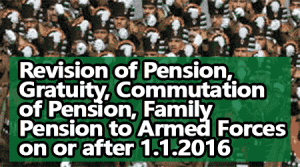 4.2 For calculation of all kinds of gratuities, dearness allowance admissible on the date of retirement/discharge/invalided out/death, shall continue to be treated as part of emoluments along with the emoluments as defined in para 4.1 above.

4.3 SPECIAL PROVISIONS FOR THOSE WHO OPTED TO CONTINUE T.O DRAW PAY IN THE PRE-REVISED SCALE OF PAY

4.3.1 Those who have elected to continue to draw pay in the pre-revised scale of pay and have retired/ discharged/ invalided out of service on or after 1.1.2016, “their pension and gratuity, as applicable, shall be calculated under the rules in force immediately before coming into effect of these-orders”.

4.3.2 The term ‘Reckonable Emoluments‘ for the purpose of pensionary benefits under this Para 4.3.1 shall be the same as defined in para 3.1 of this Ministry’s letter No 17(4)/2008(2)/ D(Pen/Pol) dated 12.11.2008 and shall also include Dearness Allowance notified under Sixth CPC Pay structure.

4.3.3 Entitlement of gratuity shall be determined, under the order in force-immediately before coming into effect of these orders subject to the maximum ceiling as prescribed in Para 8 of this Ministry’s letter No. 17(4)/2008(2)/D (Pen/Pol) dated 12.11.2008.

4.3.4 Family Pension shall also be allowed in accordance with orders applicable prior to the issue of these orders.

6.1 Subject to para 6.2, there shall be no change in the provisions regulating the amount of pensions including pension determined under casualty pensionary awards. However, the provisions for determining pension based on, notional maximum of pre-revised pay scale in respect of JCOs/OR, shall be discontinued.

6.2 The amount of pension shall be subject to a minimum of Rs 9,000/- and the maximum pension would be 50% of highest pay in the Government (the highest pay in the Government is Rs 2,50,000/- with effect from 1.1.2016). However, the maximum ceiling’shall be applicable only in the case of Service/Retiring Pension, Service element of Disability/ Liberalized disability/ War Injury Pension and Ordinary Family Pension. The said ceiling is not applicable in the cases of Disability/ Liberalized Disability/ War injury element, being authorized under casualty pensionary awards.

7.1 The maximum limit of all kinds of Gratuity is. Retiring/ Retirement /Service Invalid/ Special/ Terminal/ Death Gratuity shall be Rs. 20 lakhs. This ceiling on gratuity shall be increased by 25% whenever the Dearness Allowance rises by 50% of the basic pay.

The rates for payment of death gratuity shall be as under:

Half month’s emoluments for every six monthly period of qualifying service subject to a maximum of 33 times of emoluments.

8.2 . The amount of all kind of family pension shall be subject to a minimum of Rs 9,000/-. The maximum amount of normal rate and enhanced rate of ordinary family pension shall be 30% and 50% respectively of highest pay in the Government which is Rs 250,000/- with effect from 1.1.2016. The maximum ceiling is, however, not applicable in the cases of Special Family! Liberalized Family Pension etc., applicable under casualty pensionary awards.

10.1 Where an Armed Forces personnel is discharged/retired under the circumstances mentioned in Para 4.1 of this Ministry’s letter No l(2)/97/D(Pen-C) dated 311.2001 with disability including cases covered under this Ministry’s letter “No 16(5)/2008/D(Pen/Policy) dated 29.9.2009 and the disability/ war injury has been accepted as 20% and more, the extent of disability or functional incapacity shall be determined in the manner prescribed in Para 7.2 of said letter dated 31.1.2001 for the purpose of computing disability/war injury.

10.2 Rates for calculation of disability where composite assessment is made due to existence of disability, as well as war injury, shall be determined in terms of provision contained in Para 3(b) of Ministry’s letter No. 16(02)/2015-D(Pen/Pol) dated 8th August 2016.

11.1 In cases of disablement ! death, following Ex-gratia award shall be payable subject to the same conditions as hitherto in force in the event of invalidment on medical ground / death of a Cadet (Direct) due to causes attributable to or aggravated by military training.

11.1.4 The Ex-gratia awards to Cadets (Direct)! NoK, shall be sanctioned purely on ex-gratia basis and the same shall not be treated as pension for any purpose.

However, dearness relief at applicable rates shall be granted on monthly ex-gratia as well as ex-gratia disability award.

13.1 There shall be no change in the provisions relating to commutation values, the limit upto that the pension can be commuted or the period after which the commuted pension is to be restored.

13.2 The pensioners who have retired between 1.1.2016 and date of issue of orders for revised pay/ pension based on the recommendations of the 7th CPC, shall have an option, in relaxation of provisions of relevant Pension Regulations, not to commute the pension which has become additionally commutable on retrospective revision of pay / pension on implementation of recommendations of the 7th CPC, Option form to be used for this purpose shall be prescribed by the PCDA (Pension), Allahabad along with their implementation instructions.

13.3 The option may be invited only from those who Want to commute their pension which has become additionally commutable as per Para 13.2 above and no commutation shall be allowed as a default. In such cases, RO/HOO/PSAs will finalize the cases without waiting for Option for commutation of additional pension and such option, if any, received later on (within four months from the date of issue of this letter) may be processed separately for additional commutation. Option for additional commutation on the basis of revised pension once exercised would be final and in no case it would be entertained at a later stage. Service Hqrs may be deputed as Nodal agencies to carry out such exercise with the respective ROs for the speedy implementation of work and forward such cases to PSAs.

14. The amount of various pensionary awards admissible in terms of this order, shall be round-ed off to the next higher rupee by the Pension Sanctioning Authorities.

15.If the amount of any monthly pension! family pension admissible under the provisions of this letter works out to be less than Rs 9,000/- per month, it shall be stepped up to Rs 9,000!- per month and authorized for payment at this rate.

16.The pension/ family pension notified in terms of these orders from 1.1.2016 or thereafter, shall qualify for dearness relief sanctioned by the Government from time to time in accordance with the relevant rules! instructions.

17. For revision of pensionary awards as per provisions of this letter in respect of Armed Forces personnel who have already retired/ discharged/ invalided out/ died on or after 1.1.2016 and in whose cases, pensionary benefits at pre-revised rates have already been notified, the Record Offices concerned in case of JCOs/ORs and PCDA(O) Pune/ Naval Pay Office Mumbai/ AFCAO, New Delhi, as the case may be in respect of commissioned officers, will initiate and forward revised LPC-cum-Data Sheet as prescribed by PCDA(Pensions), Allahabad, to their respective Pension Sanctioning Authorities (PSAs) for issue of Corrigendum PPOs notifying the revised pensionary awards. Further, implementation instructions to all concerned, shall be issued by PCDA (Pensions), Allahabad immediately on receipt of these orders.

18. Pension Regulations of the three Services, shall be amended in due course.

S/d,
(Manoj Sinha)
Under Secretary to the Government of India.