Anomaly in Computation of Minimum wage: NCJCM Staff Side Anomaly Item No.1

In Para 1.29 of Chapter 1 of the 7th CPC report, the larned Chairman of the Commission Justice Shri AK Mathur has approvingly quoted the following observation their Lordship in the Supreme Court in the case of Bhupendranath Hazarika and Another Vs. State of Assam (SC 2013 (2) Sec.516)

“……….. It should always be borne in mind that legitimate aspirations of the employees are not guillotined and a situation is not created where hopes end in despair. Hope for everyone is gloriously precious and that a model employer should not convert it to be deceitful and treacherous by playing a game of chess with their seniority. A sense of calm sensibility and concerned sincerity should be reflected in every step. An atmosphere of trust has to prevail and when the employees are absolutely sure that their trust shall not be betrayed and they shall be treated with dignified fairness then only the concept of good governance can be concretized. We say no more.”

Naturally the recommendations of the 7th CPC ought to have been in consonance with the spirit of the observations made in Para 1.29, While determining the Minimum Pay (Chapter 4.2). The Commission is on record to state that it shall abide by the formula of Dr WR Aykroyd as amended by Supreme Court in the case of Workmen represented by Secretary Vs. Management of Reptakos Brett and Co. Ltd and Anr. on 31st October, 1991 (Equivalent citations: 1992 AIR 504, 1991 SCR Supl. (2) 129). In its submissions made to the Govt, the Staff Side had pointed out the errors and omissions crept in the computation of Minimum wage and its consequential impact. The Commission’s recommendations in this regard was clearly in violation of what has been stated in para 1.29 (quoted above). We annex for ready reference the extracts from our own submissions pertaining to this issue. 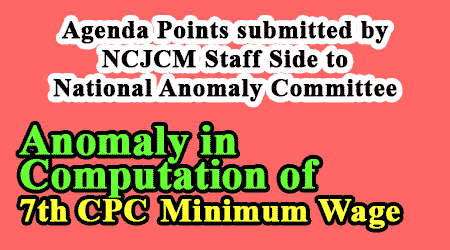 Our submission to Cabinet Secretary on 7th CPC:

“We are not in agreement with the methodology adopted by the 7th CPC in computing the minimum WAGE. We give hereunder briefly the reasons thereof.

1. The retail prices of the commodities quoted by the Labour bureau is irrational, imaginary and even absurd in respect of certain articles at certain places. The Staff Side had objected to the adoption of those rates in its meeting with the Commission on 9th June, 2015.

2. The adoption of 12 monthly average of the retail prices is contrary to Dr. Aykroyd formula. Same is the case with the reduction effected by the Commission on housing and social obligation factors. The house rent allowance is not a full compensation of the expenditure incurred by an employee for obtaining an accommodation. Therefore, no reduction on that count in arriving at the minimum wage is permissible. We may cite the minimum wage computation made by the 3rd CPC in this regard. The employees were in receipt of HRA even at that time. But still the 3rd CPC, and rightly so, adopted the 7.5% as the factor for housing. In respect of the addition to be made for children education and social obligation as per the Supreme Court judgement, (25%) the Commission has reduced the percentage to 15% on the specious plea that the employees are separately given children education allowance. The Children education allowance is not a full reimbursement of the expenses one has to incur. After the liberalization of the Education Sector where private parties were allowed to set up universities and colleges, the expenses for education had increased heavily. No concession or allowance is granted to the employees for educating the children beyond the higher secondary levels. The earlier Pay Commission has only tried to compensate a little in the increasing cost of education and that too at the primary level, since even the Governmental institutions had started charging abnormal tuition and other fees.

3. The website maintained for the Agriculture Ministry depicts the retail prices of commodities which go into the basket of minimum wage computation. Even though the rates quoted by them vary from the real retail prices in the market, it provides a different picture. If one is to take the rates quoted by them for different cities and make an all India average of the prices as on 1.7.2015, it will work out to Rs. 10810. It will result in the computation of the minimum wage of Rs. 19880. Adding 25% for arriving at the MTS scale, it will rise to Rs. 24850. To convert the same as on 1.1.2016, 3% will be added as suggested by the 7th CPC. The final computation will be Rs. 25,596, when rounded off shall be Rs. 26000.

6. The 5th CPC adopted the rate of growth in the economy (as reflected in the increase in the per capita net national produce at factor cost) over a period of ten years to arrive at the increase required to be made to arrive at the minimum wage. The per capita NNP at factor cost registered an increase of 65.28% over a period of ten years in 2013-14. If we apply the same percentage to the emoluments (Pay +DA) as on 1.1.2016 (assuming that DA will be 125% as on that date), the minimum wage as on 1.1.2016 for an MTS will have to be Rs. 26030, rounded off to Rs. 27000.

7. In para 4.2.9 of the report, the Commission has given a table depicting the percentage increase provided by the successive Pay Commissions, according to which the 2nd CPC had made a paltry increase of 14.2%. The 3rd CPC gave a rise of 20.6, 4th 27.6, 5th 31.0 and 6th CPC 54%. While the per centage increase had been in ascending order all along, the 7th CPC has sought to reverse that trend ostensibly for reasons unknown. It was the meager increase of 14% provided for by the 2nd CPC that triggered the volatile situation in the civil service and led to all India strike encompassing all employees which lasted for 5 days in 1960.

8. In the case of Bank, Insurance and many other Public Sector Undertakings wage revision takes place once in 5 years. In the recently concluded agreement, Bank employees were provided more than 15% increase.

9. After the implementation of the Pay Commission Report the AP State Employees have been given a wage structure based on a minimum wage for above the level of Central Government employees. In their case also wage revision does take place once in 5 years.

It could be seen from the above that the computation of minimum wage by the 7 CPC is prima facie wrong and computed on untenable premises and incorrect data. The minimum wage therefore requires re-computation and revision. Once the minimum wage gets revised, the fitment formula, the multiplication factor applied for determining the pay levels and the pay matrix itself will have to be consequently revised.”

It could be seen from the above extract that the Minimum Wage as on 1.1.2016 could not have been computed at less than Rs 26000/- and consequently the multiplication factor ought to have been at 3.714. It is, therefore, demanded that the Minimum Wage and multiplication factor may be recomputed and Pay Level and Pay matrix changed in accordance with the revised minimum wage.