You are here: Home / DEARNESS ALLOWANCE / AICPIN for July increased by 5 points – What is the impact on DA from January 2018

To the surprise of many , the AICPIN for the month of July increased by 5 points. This will definitely have a positive impact on DA hike from January 2018 .

Click here to Check the Expected DA from January 2018 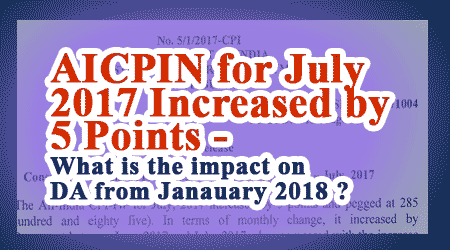 The next issue of CPI-IW for the month of August, 2017 will be released on Friday, 29th September, 2017. The same will also be available on the office website www.labourbureaunew.gov.in.

Another opportunity to Government employees to exercise/re-exercise option for pay fixation as allowed under O.M. dated 28.11.2019 within three months from the date of issue of this Office Memorandum

CGHS beneficiaries getting medicines for Chronic diseases shall be permitted to purchase medicines based on the prescription held (prescribed by CGHS Medical Officers/CGHS Specialists /other Govt. Specialists/ Specialist of empanelled hospital) till 31st July, 2021