The 2 point increase in the AICPIN for the Month of June 2017  has almost confirmed the DA hike to be announced from July 2017 by the Union Cabinet. Labour Bureau has released the CPI for Industrial workers for the month of June 2017 yesterday. According to its press release,  the AICPIN  increased by 2 points and Pegged at 280. With that CPI Point, the Average AICPIN for 12 Months from July 2016 to June 2017  is 276.92. It increases the total DA from 4% to 5.93% . But due to the practice of ignoring the fractions from the figure  arrived through the DA calculation, the existing 4% DA will be increased to 5% only from July 2017 . The DA will be announced by the Union cabinet  in the first week of September 2017 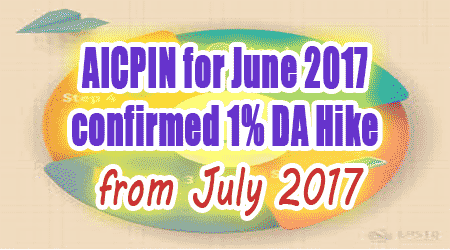 The indices of 33 centres are above All-India Index and other 45 centres’ indices are below national average.

The next issue of CPI-IW for the month of July, 2017 will be released on Thursday, 31st August, 2017. The same will also be available on the office website www.labourbureaunew.gov.in.

These rules may be called the Code on Wages (Central Advisory Board) Rules, 2021 and they shall come into force on the date of their publication in the Official Gazette

AICPIN for the Month of January 2021 decreased by 0.6 points and stood at 118.2 (one hundred eighteen and point two)

It is clarified that the Special Cash Package is in lieu of pending LTC for the Block between 2018-21 and bills for availing this scheme are to be submitted before 31.03.2021