You are here: Home / FINANCE MINISTRY ORDERS / FINMIN ORDER / Payment should not be made for Abolished Allowances from this Month – Finmin Order

The undersigned is directed to inform that the recommendations of the 7th CPC on allowances have been accepted by the Government with 34 modifications. Resolution in this regard has been published on 6th July, 2017.

2. In this regard, attention is drawn to Para 8.2.5 of the Report of the 7th CPC wherein it has been mentioned that any allowance, not mentioned in the Report (and hence not reported to the Commission), shall cease to exist immediately. In case there is any demand or requirement for continuation of an existing allowance which has not been deliberated upon or covered in this report, it should be re-notified by the Ministry concerned after obtaining due approval of Ministry of Finance and should be put in the public domain.

3. As the recommendations of the 7th CPC on allowances have come into effect from 1st July, 2017, disbursement of all existing allowances which have 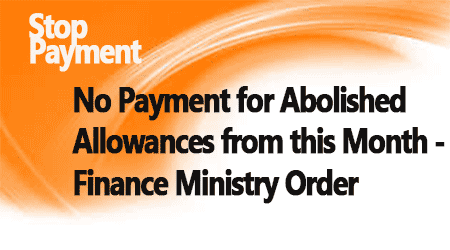 not been specifically recommended for continuation in terms of the Resolution dated 6th July, 2017 shall be discontinued from the salary of the month of July, 2017.

5. It shall be the responsibility of the Heads of the Department to ensure that no bills relating to disbursement in respect of such allowances is drawn by the Head of Office/Drawing Disbursing Officers under their purview/ jurisdiction. Pay and Accounts Officers shall ensure that no payment is effected if any such bill relating to the disbursement of the discontinued allowances is submitted to them. If such bills are received, they should be returned to the DDO and intimation thereof shall also be given to the Head of the Department and the Chief Controller of Accounts.