The Loss and gain in Annual Increment with Actual and Cumulative Increase by 3% from Pay Matrix is prepared based on anomaly Point raised by Confederation of central government Employees .

Everybody thought that the Pay Matrix evolved by 7th Pay Commission would be a flaw less in Fixing Pay in Revised scale. However it is right observation because it doesn’t need any calculation to revise pay or fixing pay on promotion. Further there is no need of any calculation for granting of annual Increment. The next higher cell in that particular Level will be fixed as Pay with annual Increment.

The issue now is raised by the Confedeartion that when we calculate three percent for adding to the existing basic pay for granting Annual Increment, some cases it is observed that the Matrix pay is lesser than three percent.

The Confederaion further stated that if the amount of Increment is Less than three percent , cumulatively it will affect the Benefit of fixation of Pay on Promotion also. 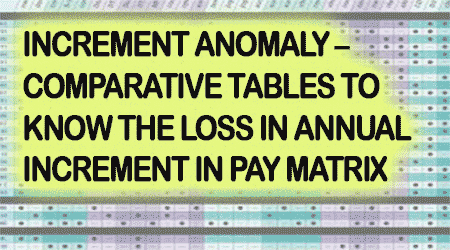 So we calculated three percent of each cell in pay matrix in Level wise and put in the table to compare it with exisiting Pay Matrix.

Further we observed that , if one cell in the Level is less than three percent hike, then it will affect or imapct the remaining Cells of that Level. .

If it is calculated 3% cumulatively from 1st Cell, the Annual Increment will be Rs.25260. So the loss is Rs.60 on annual Increment.

Click here to See:  How Much loss in Annual Increment in Pay matrix

Let us hope that the issue raised by the Confederation will be addressed by Anomaly Committee.

It has been decided that submission of bills claims may be entertained and settled by Ministries/Departments not later than 31st May, 2021. However it is reiterated that payment for the purchases should have been made not later than the due date ie. 31st March 2021

Detection of a travel related/unrelated suspect case of novel Coronavirus Disease (COVID19) will be followed by rapid isolation of such cases in designated health facilities and line listing of all contacts of such cases. Home quarantine is applicable to all such contacts of a suspect or confirmed case of COVID-19

Payment of 80% of premia paid or surrender value, whichever is higher, in case of suicide committed before expiry of 1 year from date of acceptance or date of revival, whichever is later

In partial modification of the O.M. of even number dated 6th April, 2021, all Central Government employees are advised to get themselves vaccinated so as to effectively contain the spread of Covid-19

The same day last year, Ministry of Finance issued order to freeze the DA at same level till 1st July 2021. Now all the Central Government Employees are wants that it should be restored from 1st July 2021