In the case of medical Officers in the Army Medical Corps, Army Dental Corps and Remount and Veterinary Corps in respect of whom Non-Practicing Allowance is admissible, the pay in the revised pay structure shall be fixed in the following manner, namely:-

(i) the existing basic pay shall be multiplied by a factor of 2.57 and the figure so arrived at shall be added to by an amount equivalent to Dearness Allowance on the pre-revised Non-Practicing Allowance admissible as on 1st day of January, 2016 and thereafter the figure so arrived at shall be located in that Level in the Pay Matrix and if such an identical figure corresponds to any Cell in the applicable Level of the Pay Matrix, the same shall be the pay, and if no such Cell is available in the applicable Level, the pay shall be fixed at the immediate next higher Cell in that applicable Level of the Pay Matrix. 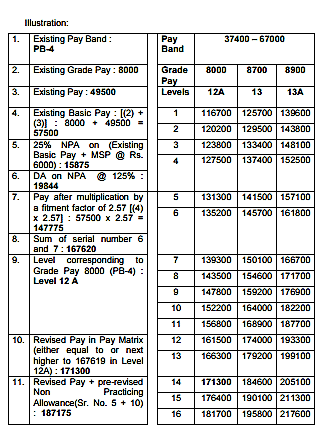