Within a few hours the historic strike of Central Government Employees including Gramin Dak Sevaks, Casual, Part-Time, Contingent, Daily rated and Contract workers will begin. From Kashmir to Kanyakumari, from North East to Gujarat the strike will be a thundering success. It is an outburst of anger and protest against those who betrayed the central government employees and pensioners.

Justice is on our side 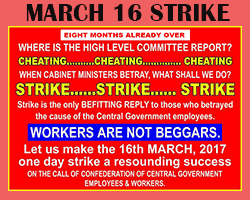 Betrayers are on the other side

Ultimate victory will be ours as we believe in
Truth, Justice and Fairplay

We are not ready to surrender the self-respect and prestige of 33 lakhs Central Govt. Employees and 34 lakhs Pensioners. Confederation is not an organization of cowards to run away from the battle field half way.

We are ready for any sacrifice to protect the interest of Central Govt. Employees and Pensioners and also for the larger interest of the toiling masses of our country.

Where other organizations failed and compromised, it is confederation – Confederation alone – which has accepted the challenge to fight against the Government which betrayed the entire Central Govt. Employees and Pensioners.

Confederation is the only glorious organization of hope and inspiration for the entire Central Govt. Employees and Pensioners.

Come one, Come all, Come in Hundreds and Thousands and Lakhs.

Let us make the 16th March 2017 Strike a resounding success.

Let us march forward with determination and courage.

We are not alone, we are not afraid and we shall overcome.