This month AICPIN suggests that the expected DA from July 2016 in Sixth Pay Commission will be in the range between 5% to 6% .

As per Labour Bureau report the AICPIN for the Month of March increased one point and stood at 268.

The current Index of selected commodities indicates that there will be some fluctuation in both sides for the remaining 3 Months. 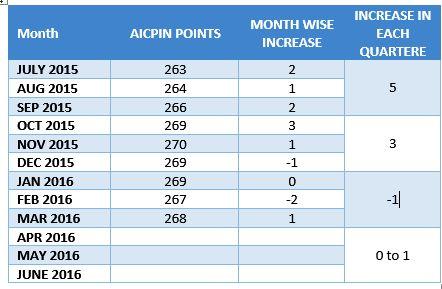 The Increase in First three Quarter are 5, 3 and -1 points respectively

Assumption -I : There is No increase or decrease in AICPIN for remaining three Months.

If that is the case, we can calculate Minimum DA to be released as per the CPI Index
The AICPIN for March 2016 is 268.
If it remains same for next three months starts from April 2016 to June 2016, the Expected DA from July 2016 will be reaching exactly at 6%

If the increase in the AICPIN goes above 7 points in last quarter,

According to the Formula prescribed for DA calculation, the rate of DA may go upto 7%

But the current trend of Consumer Price Index indicates that the increase will not be more than three or Four points for last quarter. So there are remote chances for the rate of DA to go to 7% Level.

On the other hand, there is higher possibilities for expected DA from July 2016 to reach 6%.