2. In this context, I am directed to inform you that as far as the provisional pension is concerned, SDBS is operated utilizing the platform of the “NPS-Lite” Scheme of the Pension Fund Regulatory and Development Authority (PFRDA). As per Gazette Notification of Pension Fund Regulatory and Development authority (Exits and withdrawals under the National Pension System) Regulations 2015, Copy enclosed there is no provision for provisional pension of any amount, as requested by the union, as far as the matter of non-issuance of PRAN Card and non-settlement of the case is concerned, the matter is being forwarded to PA wing for providing status in the matter. 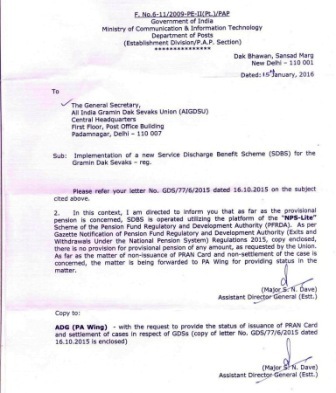