To
All Constitutents of NJCA

We send herewith the copy of our letter dated 10.12.2015 addressed to the Cabinet Secretary intimating him of our suggestions and demands on the recommendations of the 7th CPC. A delegation of the NJCA met the officials in the DOPT and Department of Expenditure today to explain the charter of demands and request for the immediate convening of the empowered committee to discuss the issues in the charter with the NJCA. The National JCA has decided to embark upon the indefinite strike action in the first week of March 2016 in case the Govt does not settle the issues through bilateral discussions, with the NJCA. The modified charter of demands is enclosed.

While handing over the letter cited to the Cabinet Secretary we have briefed the officials of Departments of Expenditure and Personnel of the demands, today.

The National JCA felt that no discussions will be possible or fruitful if it is not backed up with agitations at the field formations. The NJCA, therefore, calls upon all affiliates to advise their affiliated unions, their Branches/ divisions/circles/zones etc to hold demonstration enlisting the participation of all members and hand over the copy of the NJCA letter to the head of offices for onward transmission to the Cabinet Secretary demanding immediate settlement of the issues. Please ensure that the said programme is carried out at all places on 30th December, 2015. This programme may be followed by a three days dharna at all State Capitals and Industrial Centers / Establishments on 19th, 20th and 21st Jan. 2016. 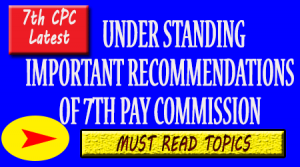 The NJCA will meet again on gth February, 2016 to decide the date of commencement of the indefinite strike action, if no settlement is brought about by then.

The NJCA has received innumerable demands and suggestions concerning the 7th CPC recommendations. We have taken a few of the most important which is of concern to the large number of employees and which have a general sweep. The demands placed before the Government cannot therefore be considered as exhaustive. We have placed the demand for setting up of a Committee of Group of Ministers both at the National and Departmental level to expeditiously address the department specific issues and other matter which are not covered by the Charter of demands. We request the affiliates to kindly go through the report thoroughly and convey to us the issues to be taken up at the National level immediately.

During the intervening period, the affiliates are earnestly requested to organize meetings at all work places covering all employees and workers and explain the demands and the decision to organize strike action in case the issues are not settled satisfactorily. The employees and workers at the grass root level must have a fair idea and understanding of the issue, before we could embark upon an industrial action.

The NJCA website will exhibit the day to day developments of the negotiations with the Government on the charter of demands.