When we get promotion or MACP , one increment and the difference between existing Grade Pay and Promotional grade pay would be granted on account of Pay Fixation in the Pre revised Pay. We used to get one increment plus Grade Pay difference as the benefit of Promotion in  Sixth Pay Commission.

But 7th Pay Commission recommended one increment to be granted as the benefit of Promotion in that same level and then the individual will be upgraded to next higher Pay Level in the Pay Matrix. Here after the hierarchy of the Grade Pay will be called as Level 1 to Level 18. How much increase we will get other than this one increment is depends on the Cell we are Placed in higher Level in New Pay Matrix .

She is upgraded to Level 5 (either regular promotion or through MACP). Then her salary will be fixed in the following manner 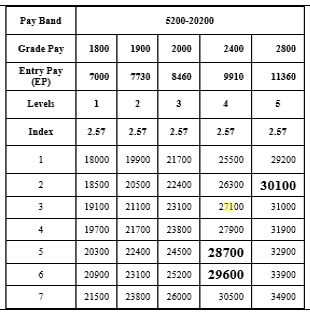