In the design of the pay matrix for Military Nursing Service (MNS) Officers, the Commission has kept in view the approach followed by previous Pay Commissions as well as historical and traditional relativities between the Armed Forces Officers and Military Nursing Service Officers. In particular the pay scales/grade pay based on the V and VI CPC Reports were kept in view. 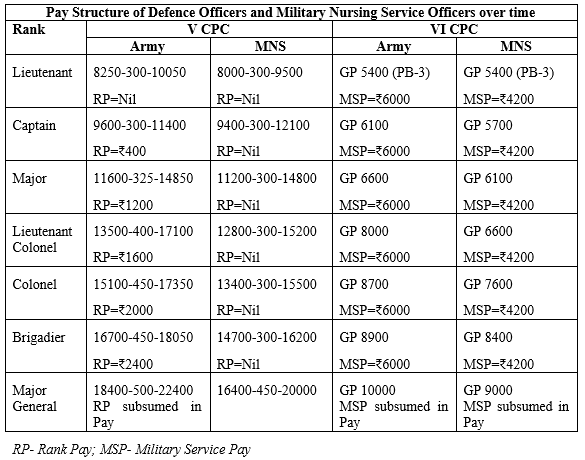 Accordingly, the following Pay matrix for Military Nursing Service (MNS) Officers is recommended by the Commission: 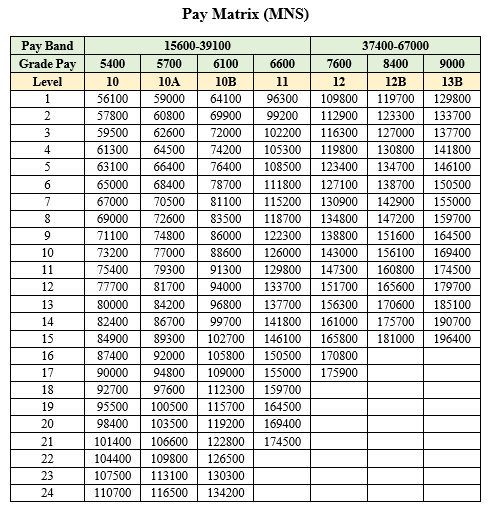 As indicated earlier in the case of the Defence Pay Matrix, the Commission has adopted an approach that blends elements of the principles and philosophy adopted in devising the matrices for civil and defence forces personnel with the existing uniqueness in the pay structure of MNS officers.

Therefore while the minimum pay at the entry level for MNS officers is identical with their civil and defence counterparts, as is the application of the fitment in pay for officers migrating into the matrix, the Commission has had to adopt a different approach while determining minimum pay corresponding to the existing grade pays other than GP 5400 (PB3). In doing so, the Commission has adopted a formulation as under:

While this formulation has been adopted for all ranks of MNS officers, two exceptions have been made for purposes of rationalising the pay structure:

i. In the case of Captains, the Commission has moderated the minimum pay level upwards to ₹59,00017, to avoid bunching of minimum pay of MNS Lieutenant and Captain.

The defence forces personnel, in addition to their pay as per the Matrices above, will be entitled to payment of Military Service Pay for all ranks….. [ CONTINUE READING....]