For defence forces personnel, there are two separate matrices, one for the Service Officers and JCO/ORs and another for the Military Nursing Officers. The existing ranks among Officers and JCO/ORs in the Defence Forces personnel has been kept in view while devising the matrix. There are a number of common strands in the Civil and Defence Pay Matrices, indeed the principles and philosophy on which they are based are identical. In the case of the pay matrix for Military Nursing Officers (MNS), the Commission has adopted an approach that blends elements of the principles and philosophy adopted in devising the pay matrices with the existing uniqueness in the pay structure of MNS officers. Some of the unique elements that merit mention in the defence Pay Matrix have been outlined below:

Commencement of Matrix: The commencement of the Defence Pay Matrix for combatants corresponds to the existing GP 2000, which is the induction level for Sepoys and equivalent.

More Compact: The Pay Matrix designed for the defence forces personnel is more compact than the civil pay matrix keeping in view the number of levels, age and retirement profile of the service personnel. For example, the term of engagement of various ranks of JCOs/ORs are fixed and of shorter duration. Service Officers on the other hand are given time scale promotion upto the rank of Colonel and Equivalent and will therefore move, from one pay level to another, in accordance with the stipulated time frame.

The Commission emphasises that the pay structure designed by it for the defence forces personnel has been done keeping in view (a) some of the aspects in their rank structure unique to them and (b) pay structure is not intended to determine the status of the personnel vis-à-vis their counterparts on the civil side. 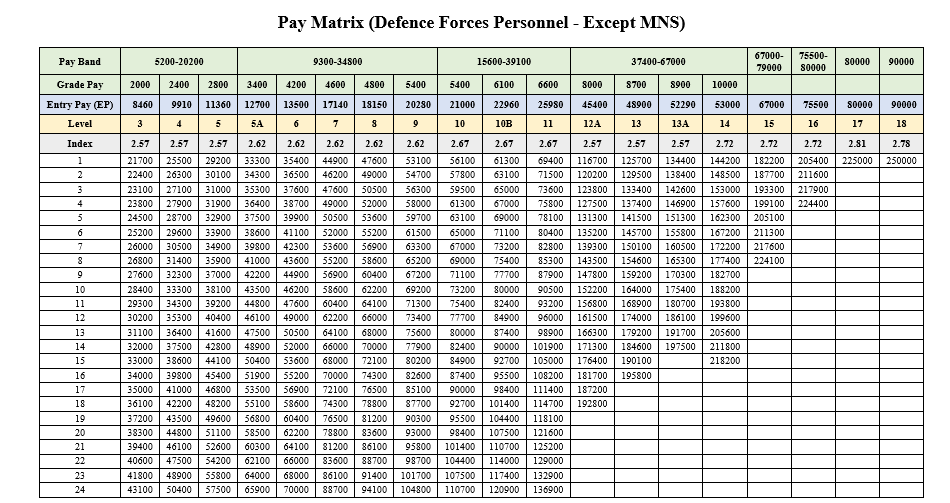 In the design of the pay matrix for Military Nursing Service (MNS) Officers, the Commission has kept in view the approach followed by previous Pay Commissions as well as historical and traditional relativities between the Armed Forces Officers and Military Nursing Service Officers. In particular the pay scales/grade pay based on the V and VI CPC Reports were kept in view….  [Continue Reading…]