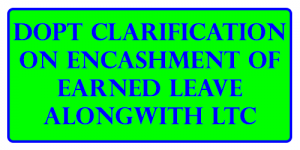 No.14028/2/2012.Estt.(L)
Government of India
Ministry of Personnel, PG and Pensions
(Department of Personnel and Training)

The undersigned is directed to refer to DoPT’s O.M. No. 31011/4/2008- Estt.(A), dated 23 September, 2008 allowing encashment of earned leave alongwith LTC and to say that references have been received with regard to the number of times that a Government servant can avail of the encashment within the same block.

2. It is clarified that the Government servants governed by the CCS (Leave) Rules, 1972 and entitled to avail LTC may encash earned leave upto 10 days at the time of availing both types of LTCs, i.e. ‘Hometown’ and ‘anywhere in India’. However, when the one and the same LTC is being availed of by the Government servant and his family members separately in a block year, encashment of leave would be restricted to one occasion only.