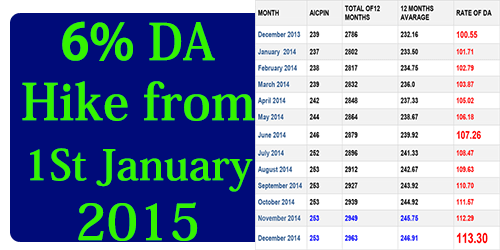 The Expectation is over now, after the Labour Bureau released the AICPIN for the Month of December 2014 on 30th January 2015. From the Month of August 2014, the consumer price Index numbers for Industrial Workers remained same at 253. As we told in the previous post on “expected dearness allowance from January 2015” that if the AICPIN Points remain same for the next consecutive two months there will not be any change in our prediction. According to the formula prescribed for calculating DA for Central government employees, these 12 months AIPCIN points made the rate of Dearness Allowance to reach 113% level. This new rate will be paid to central government employees with effect from 1.1.2015. The Union Cabinet gave its approval for the previous installment of Dearness without any hype on 4th September 2014. So we can expect now this government will announce its decision over increasing rate dearness allowance in the first week of March 2015.