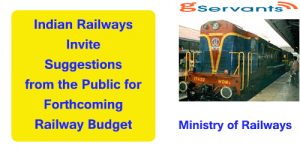 The Minister of Railways Shri Suresh Prabhakar Prabhu has been emphasizing on the need to make Indian Railways citizen oriented, so that citizens can provide inputs on various aspects on railways to improve services in railways. It is also in line with the approach of Hon’ble Prime Minister on the matter of participative governance.

The Ministry of Railways has invited suggestions from the public on various subjects for the forthcoming railway budget 2015-16. The citizens can login on the website of Ministry of Railways with the URL www.indianrailways.gov.in and submit suggestions online on varied railway subjects which include computerization, electrical, electrification of lines, finance, foot over bridges, freight, Infrastructure, innovative ideas and railway lines, Road Over/Under Bridges, crime prevention, safe running of trains/Disaster Management, tourism related services, new trains, extension of trains, augmentation of trains, frequency of trains, pantry cars & catering etc.etc. Suggestions for the forthcoming budget can be submitted upto 16th January, 2015.

In addition, Citizens can also give their complaints, general suggestions and feedback online on the same website of the Ministry of Railways round the year which can be tracked also online.

In a similar move, a community social media platform called ‘LocalCircles’ with the URL ‘http://www.localcircles.com’ has voluntarily offered to be a partner with Indian Railways to provide collective citizen inputs on various aspects pertaining to railways. The local circle “Make Railways Better” has been generating number of inputs based on the feedback from their large 70,000+ strong online citizen community on various subjects like budget, cleanliness, safety, reservation systems, productivity, food etc.

Collective inputs from the citizens are being seen and examined by the Railway administration and incorporated into various initiatives as found fit and feasible.

Indian Railways welcomes such initiatives from the civil society and it proposes to engage citizens to participate in its other key objectives also like cleanliness, improving civic sense and together making Indian Railways the best rail network in the world.

Such initiatives will help Railways come closer to citizens and better understand challenges that the citizens experience and ensure that most important areas from a citizen perspective find place in Railways’ priorities.