You are here: Home / CENTRAL GOVERNMENT EMPLOYEES / Changes in Reservation Policy in Promotion 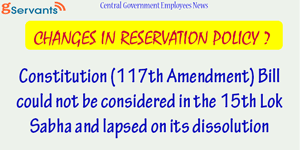 The policy of reservation to Scheduled Castes and Scheduled Tribes in services under the Government of India is administered through various executive instructions issued from time to time, copies of which are available on DoPT’s website.

While upholding the validity of Constitution amendment to provide reservation in promotion in favour of Scheduled Castes and Scheduled Tribes, the Hon’ble Supreme Court in the M.Nagaraj case prescribed certain conditions. The Hon’ble Rajasthan High Court also quashed the notifications providing for consequential seniority and promotion to the members of the Scheduled Castes and Scheduled Tribes. This judgment was upheld by the Apex Court in its judgment dated 7.12.2010.

In order to provide impediment free reservation to Scheduled Castes and Scheduled Tribes in promotion, a Constitution (117th Amendment) Bill was introduced in the Rajya Sabha and was passed on 17.12.2012. The Bill, however, could not be considered in the 15th Lok Sabha and lapsed on its dissolution. The matter is under examination.

This was stated by the Minister of State for Personnel, Public Grievances and Pensions Dr. Jitendra Singh in a written reply to Shri Harish Meena in the Lok Sabha today.