You are here: Home / DEARNESS ALLOWANCE / Dearness Allowance for Bank Employees for November, December 2014 and January 2015

Dearness Allowance for Bank Employees for  November, December 2014 and January 2015 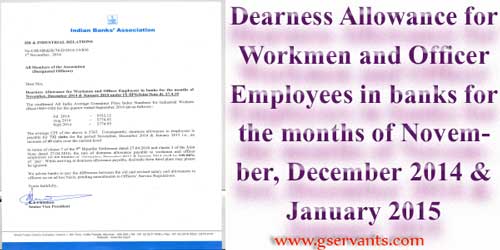 All Members of the Association
(Designated Officers)

The confirmed All India Average Consumer Price Index Numbers for industrial Workers (Base 1960=100) for the quarter ended September 2014 are as follows:

The average CPI of the above is 5767. Consequently, dearness allowance to employees is payable for 732 slabs for the period November, December 2014 & January 2015 i.e., an increase of 49 slabs over the current level.

In terms of clause 7 of the 9th Bipartite Settlement dated 27.04.2010 and clause 3 of the Joint Note dated 27.04.2010, the rate of dearness allowance payable to workmen and officer employees for the months of November, December 2014 & January 2015 shall be 109.80% of ‘pay’. While arriving at dearness allowance payable, decimals from third place may please be ignored.

We advise banks to pay the difference between the old and revised salary and allowances to officers on an ad hoc basis, pending amendments to Officers’ Service Regulations.

It has been decided that submission of bills claims may be entertained and settled by Ministries/Departments not later than 31st May, 2021. However it is reiterated that payment for the purchases should have been made not later than the due date ie. 31st March 2021

Detection of a travel related/unrelated suspect case of novel Coronavirus Disease (COVID19) will be followed by rapid isolation of such cases in designated health facilities and line listing of all contacts of such cases. Home quarantine is applicable to all such contacts of a suspect or confirmed case of COVID-19

Payment of 80% of premia paid or surrender value, whichever is higher, in case of suicide committed before expiry of 1 year from date of acceptance or date of revival, whichever is later

In partial modification of the O.M. of even number dated 6th April, 2021, all Central Government employees are advised to get themselves vaccinated so as to effectively contain the spread of Covid-19

The same day last year, Ministry of Finance issued order to freeze the DA at same level till 1st July 2021. Now all the Central Government Employees are wants that it should be restored from 1st July 2021